It was many years ago in the 90’s that I first used the Ax blades from Milwaukee tool. They immediately became my favorite blade for any kind of demolition where I would be encountering nails or screws or roofing materials. That was a long time ago but the ax has continued to hold the top spot as my choice for any tough cut

The design has been continually improved for greater durability and faster cutting speeds. The main body has remained very similar. It is both thicker and deeper than most  reciprocating saw blades for  greater strength. original high-speed steel teeth were very effective in cutting nail embedded wood. They were small enough that they didn’t break off easily and stayed sharp for a good long time compared to normal wood blades. 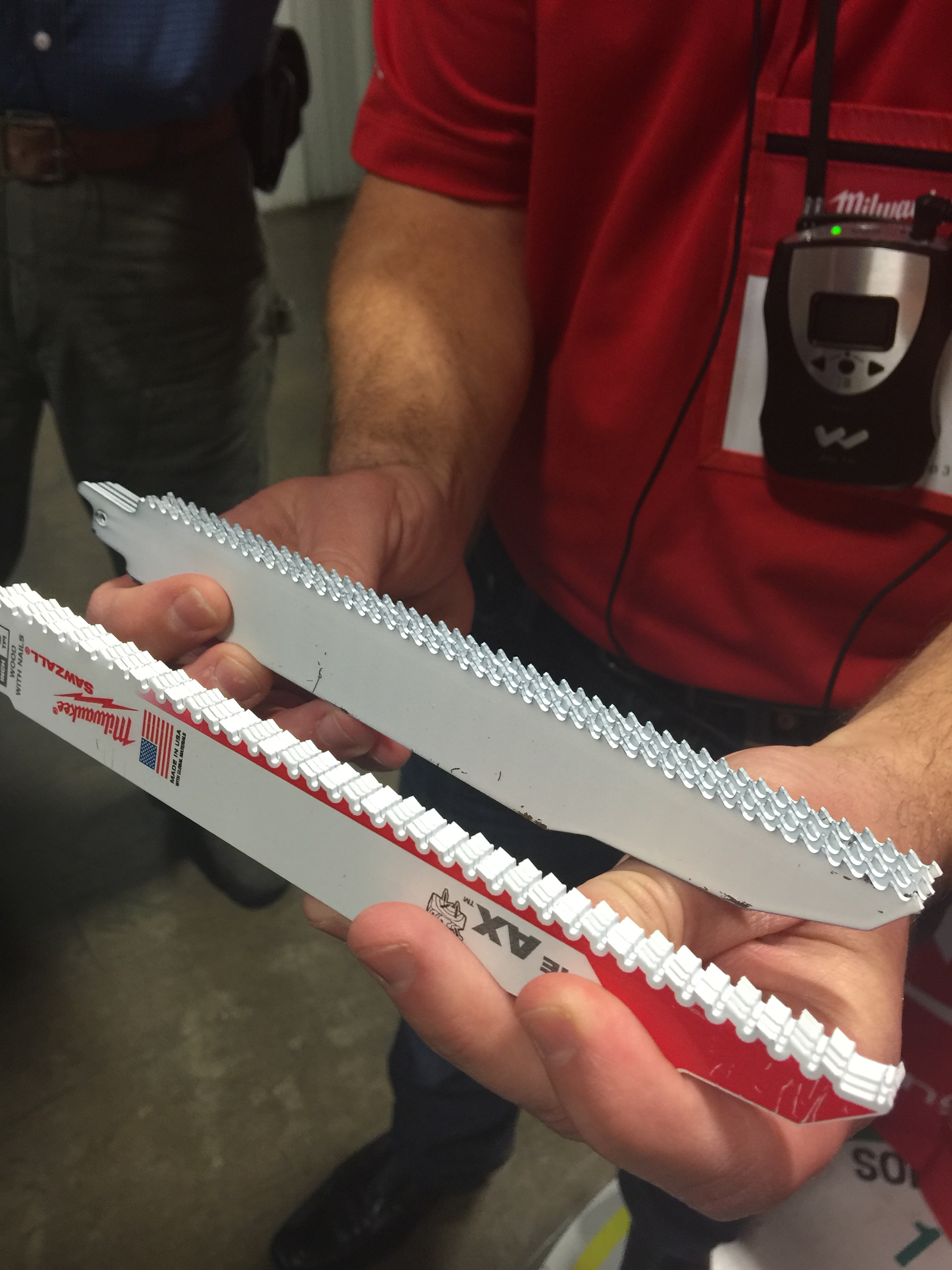 Milwaukee never rests and has continually improved the AX blades.  There was at first an adjustment in the number of teeth per inch.  There were more teeth per inch close to the tang for durability and fewer further out for faster cutting in heavier materials. This was developed from user feedback. One of the most effective improvements was changing the tooth profile to add a tooth guard. This allows fewer teeth per inch for faster cuts but strengthens the tooth from breakage and limits the bite depth so the tooth has less exposure on hard impacts with nails and screws. The next development was creating the fang tip for really fast plunge cuts.

Even though this proved to be one of the most durable blade designs ever, Milwaukee knew they could do better. The future of premium sawzall blades would have to have a more durable tooth. Enter tungsten carbide.  If the right balance of carbide particles and binders could be developed it would not only stay sharp longer, it would open up new possibilities of what you could do with a SAWZALL!

Milwaukee is not the first company to offer carbide toothed reciprocating saw blades. I have  used carbide blades from a handful of companies with mixed results. The first blades I bought from one competitor were a huge disappointment. They lasted a long time in clean wood but the second I encountered a nail or screw, several teeth would be lost.

Early failures were partially because early blade designs were based on circular saw blade technology. What works for a circular saw may not work for a reciprocating saw. Tooth profile, hardness as well as connection to the blade itself all affect durability in different ways.  The wear and tear on a recip blade is  often far more severe than a circular saw blade. There is far more vibration and impact with the material as well as embedded nails and screws or adjacent surfaces like concrete.

One advantage Milwaukee has is they operate their own carbide factory in Germany. This allows them to spend countless hours researching, developing and testing  many different grades of carbide and how they perform in an exhaustive array of materials and conditions.

A particularly memorable part of the factory tour is where the carbide cylinders are actually welded to the steel strapping that will become a seemingly unending supply of blades. That’s right. Each tooth starts out as a carbide cylinder which is individually welded, not brazed, right to the steel. It’s actually a beautiful process to watch. I would love to share a video of it but it is not permitted. 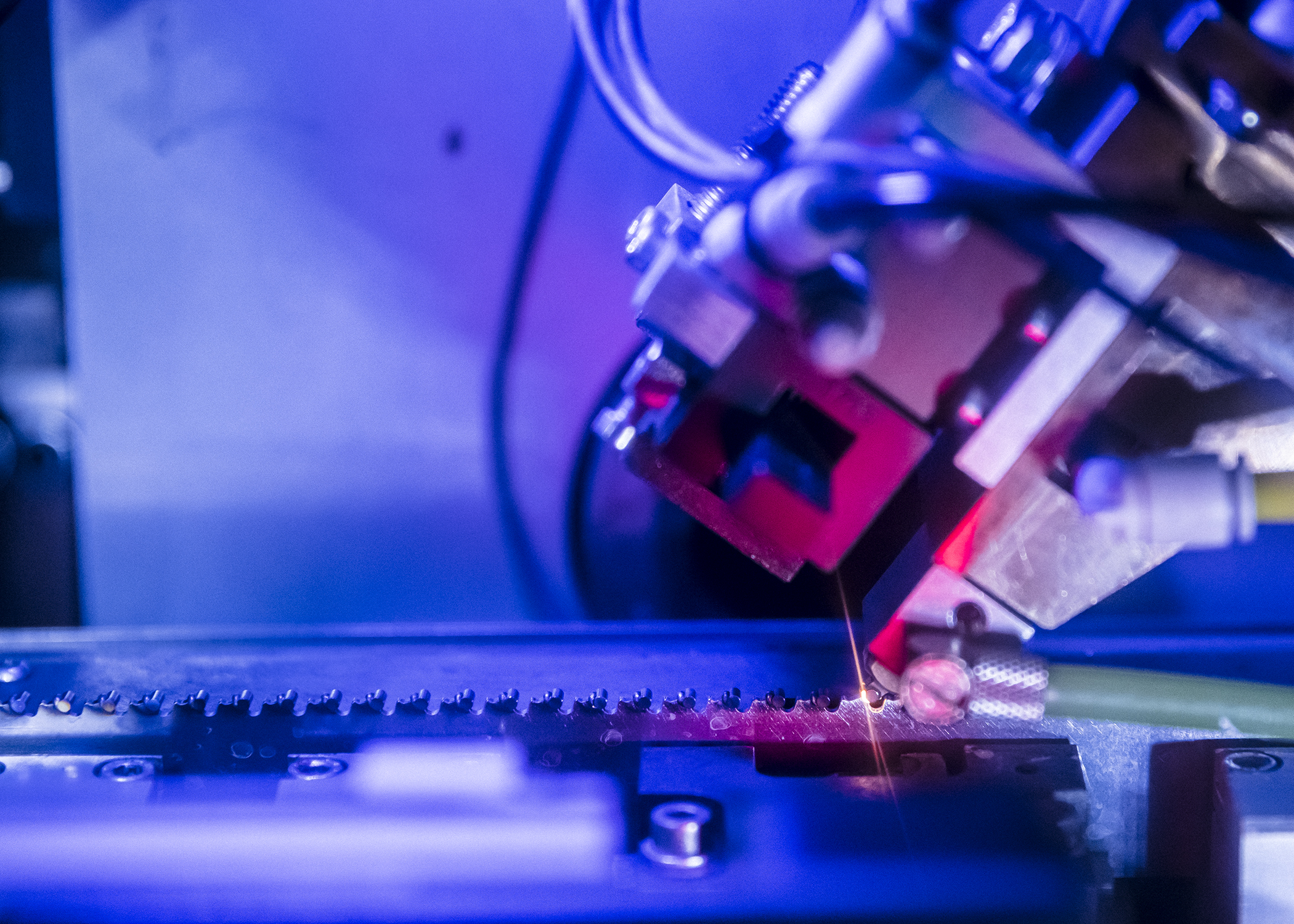 A carbide tooth is born

After this the various lengths are cut, tooth profiles are ground and the blade is heat-treated. The next steps are powder coating, labeling, packaging and then distribution so we can put them to work on our jobs.

With each new generation of Ax blades we see improved cutting performance and blade life. So far they have been my most used blade in demolition of fire and water damaged buildings. You never know when you are going to encounter  nails or worse, hardened  screws when cutting framing members out. As long as I don’t break the blade accidentally, I find that they last longer than 20-30 regular blades. To me the Ax carbide blades represent the best value of any blade designed for wood with nails.

The world is pretty much butter for the carbide ax. Milwaukee actually issued a challenge to many of us in the tool review community. They sent us blades and said see what you guys can cut . I decided to use one blade and see how far I could go with it. I cut numerous nails, screws and bolts. It was not enough. I had to find something more challenging. I cut a dead

drill up. The blade went right through the whole motor and transmission. It went through ball bearings, gears  and the hardened steel Armature shaft.

I even bought a grade 8 bolt just for testing purposes. It was 5/8″ diameter 5″ long. I first cut the head off which was way too easy.

Next I clamped it in the vise and sliced it all the way down the middle.

Remember this is designed as a wood blade. Also remember that a single blade was used for all of these tests

After that I decided that my elbows and hands needed a rest from testing sawzall blades.

With such an  outstanding heritage and relentless improvement the Milwaukee ax family and especially the carbide ax blades represent an unbeaten value and stand  as my number one choice in Sawzall blades.