What is the “Surge”? It’s a brand new 4 mode brushless driver with a hydraulic power train instead of a traditional hammer and anvil impact driver. It looks like an impact. It does the work of an impact driver but it is much different in operation to reduce jobsite noise pollution and exposure by 1/2 or more. It also provides 3x less shock to your hand and wrist.

The Surge operates at 76 dB in controlled tests according to Milwaukee. This is at least 10-15 dB lower than traditional impact drivers. I do not have in anechoic chamber for such testing but I found in my shop that it was around 82 to 85 dB in normal fastening situations. My measurements are probably more realistic than factory controlled measurements with soundproof walls. However compared to normal impact drivers which operate at around 100 dB it is a huge improvement!

There are 3 other impulse drivers on the market already. The Makita xst01 is about 2 years old and has been my favorite so far in this category. Ridgid made the stealth force driver late in 2015 and Ryobi also just brought one out. The Ridgid and Ryobi work well but I do not like them. They are far too big for extended professional use.

I really like the route Milwaukee took with the Surge. Instead of following the lead of the DIY companies, they decided early on that their driver would be compact and light with adequate power for 90% of medium or smaller fastening tasks. Screws and smaller lags 6″ or less. For larger fasteners it is recommended to use a traditional impact driver or impact wrench.

The Surge is a dead ringer for the feel of the Fuel generation 2 impact driver. It is just about 1/4″ shorter in length at 5″ . It weighs just 2.1 lbs.. the grip and balance are spot on for heavy extended use. It feels best with a compact battery.
It has 3 speeds for a wide range of fasteners and applications. The 3 speeds really reduce screw stripping and ruined work. It also has a 4th screw driving mode for sheet metal screws. This mode starts the driver at full speed and as the screw drives into the metal, it slows down to aid in a controlled fastening. This makes it much easier to stop driving before the screw head breaks or the hole is stripped from over driving.

If you are like me you were wondering what can a driver with only 450 inch lbs do for me? After all most impact drivers today are rated at 1500+ inch lbs. If you have been following me for any time on Instagram you know for a fact that it is not always about numbers. Often times a tool with a much lower torque rating will get to the job done faster. The new hydraulic power train on the surge develops peak torque faster than an impact driver and holds that peak torque longer so that in our hands with 90% of fasteners, it actually operates almost exactly like a regular impact driver. 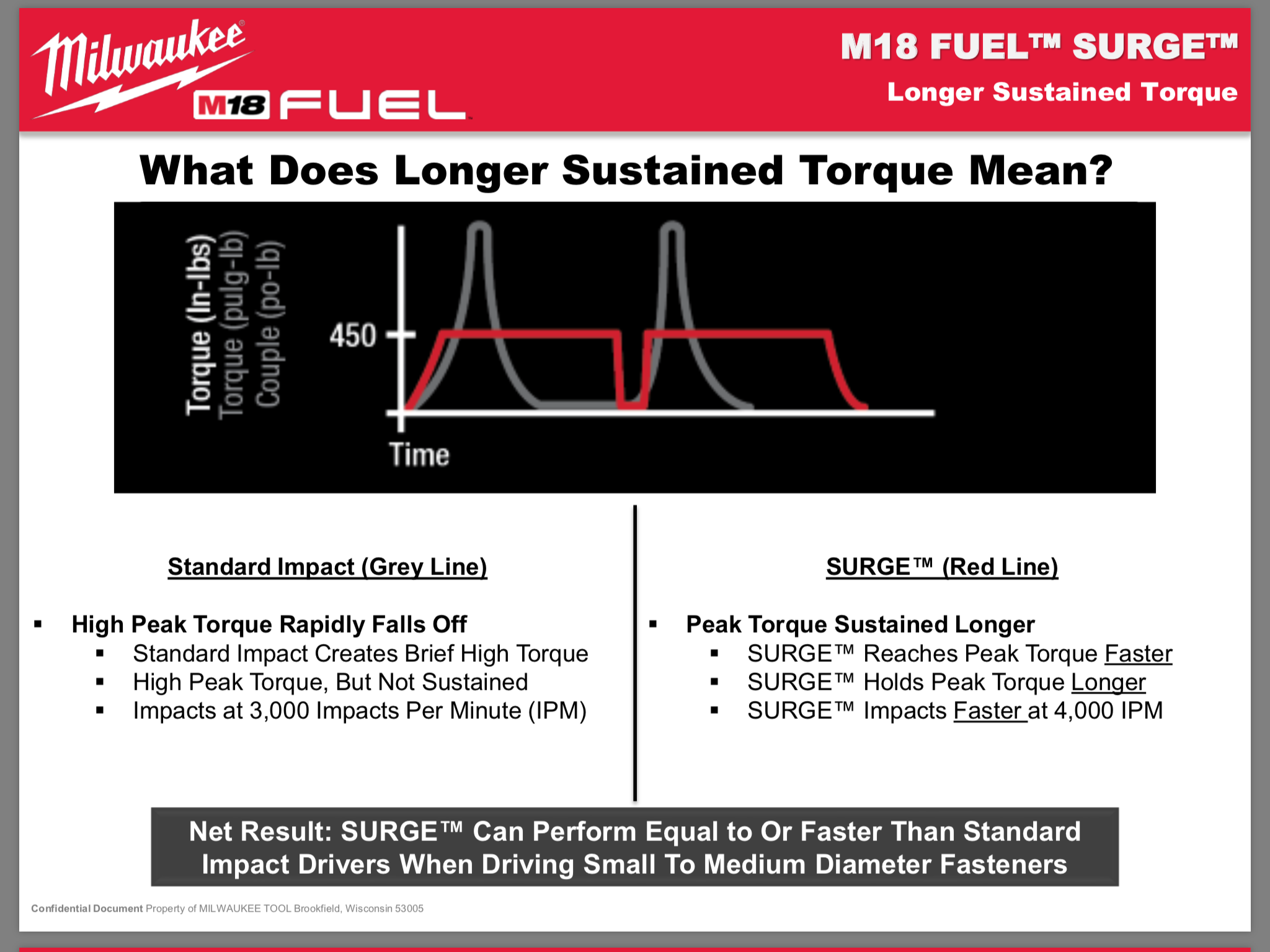 I ran several speed tests with the surge and the top of the line 2757 Fuel one-key impact driver. In each test the Surge was a second or less behind the one key impact in finishing a screw. I tried drywall screws, 3 inch decking screws, 4 inch decking screws and 6″ ledgerlock lag screws. While it is not quite as fast as the one key impact driver it will certainly keep up and do the work we need to get done quietly. Compared to lesser impact drivers, the surge is equal or faster.

Watch my video about the Surge here>>> https://youtu.be/7WfqdDMQdXc 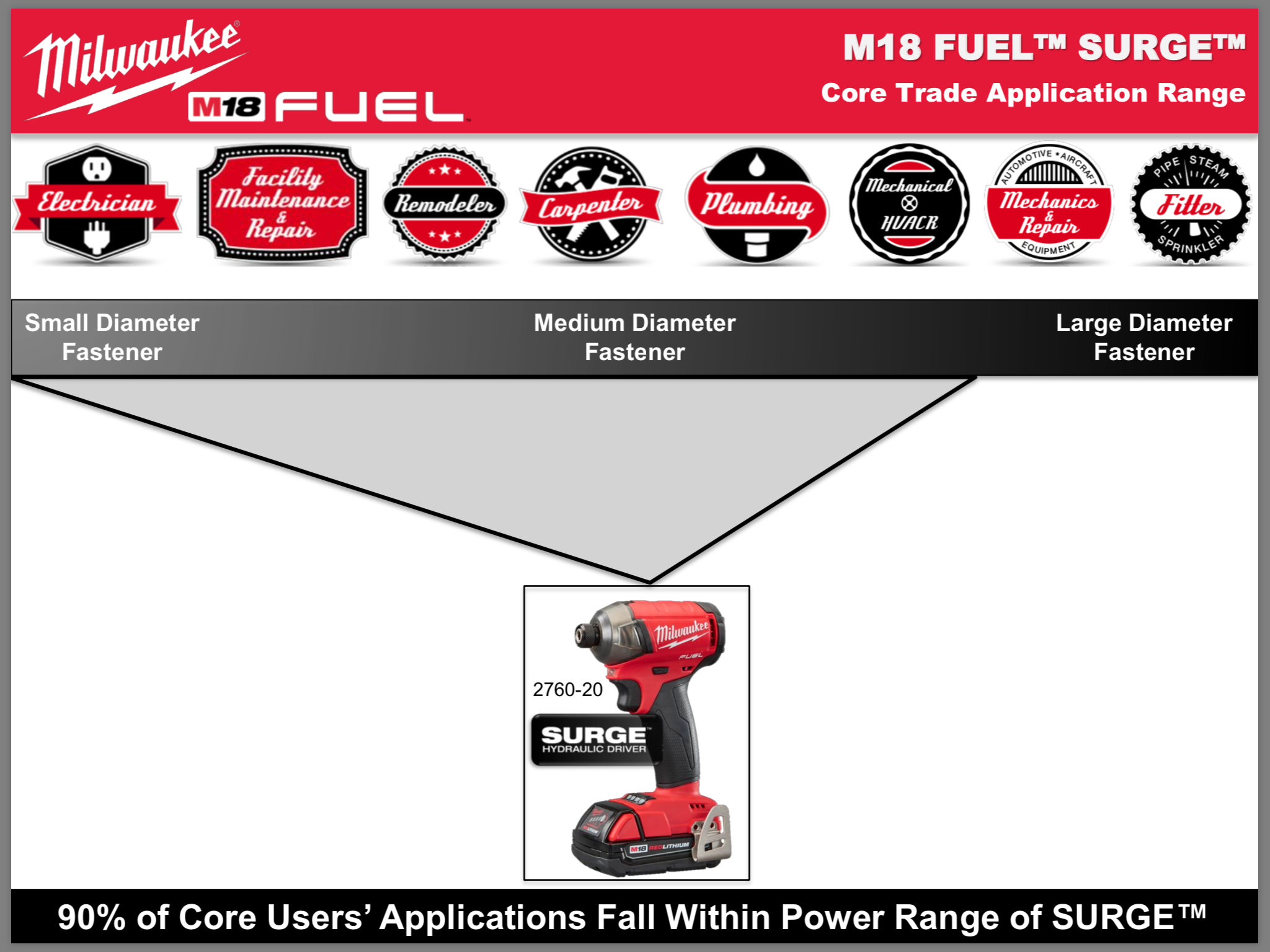 I have been preaching the benefits of soft impact drivers for some time now. It is great to see another great tool companycoard with the release of the Fuel Surge hydraulic driver from Milwaukee. It is very reasonably priced at $150.00 US for the bare tool. There is a one-key version coming soon as well. Get your hands on one and see the difference for yourself.